Going for an FKT

I became aware of FKT’s during lockdown 1.0 in April 2020 but never really looked into them as I thought I’m never going to be fast enough to get one

Then came Lockdown 2.0 - November 2020 - I am listening to the Obstacle course racing media podcast and Matt B Davies is talking about doing an FKT that no one has done before and my interest was peaked – could there be one near me that never been attempted - and could I get a FKT / OKT (Only Known Time

But then at the end of Feb 2021 I go on the FKT site and what do I find – more routes, around 30 had been uploaded in Feb and several of them in my home county of Yorkshire – The game is afoot as Mr Holmes would say

After much discussion me and my 2 buddies Jamie and Rob decided we would go for the Brighouse Boundary walk – 16.7 miles according to the GPX file on the FKT website and around 2200ft of elevation – a steady 3-4 hour run in our heads

Days leading up to this I was a right giddy kipper, texting and messaging about it to friends and family checking and double checking i had everything prepared

March 6th the day of the attempt came, I was up at 5am getting ready, nervous poo, bit of mountain fuel pre work out and another nervous poo

All the kit was ready Truesapien top and shorts, comfy balls to protect the crown jewels, Salomon race vest, Compresssport socks and I decided to go for the Nike wildhorse running shoes

I stocked up on mountain fuel drink and Voom energy bars and set off at 6:30am, the plan was for us all to met at 7am so I wanted to be a few mins before

I was the last there and the other two where all ready and waiting to go, so it was a fast turn around slipping into my nike wildhorse and putting by bottles in my Salomon rucksack, I put my Suunto watch onto routes and loaded up the route and we was ready to set off at 7:05am

The first mile was along a nice single track path with a gradual climb, but straight after that mile we got lost – the GPX file I had downloaded was only a rough guide with straight lines, not the actual route so we turned left when we should have gone right.

¼ mile further and we turned back asking for directions – and found ourselves back on track, but just another few miles in and we went right when it should have been left through an housing
estate and again we had to turn back –

The route itself meandered around Brighouse, along country lanes, open moors, farm yards and a little road running, it undulated up and
down as we went with one really notable climb along an old wagon trail that still had the cobbles, it seemed to go on for a mile ( see pic below) 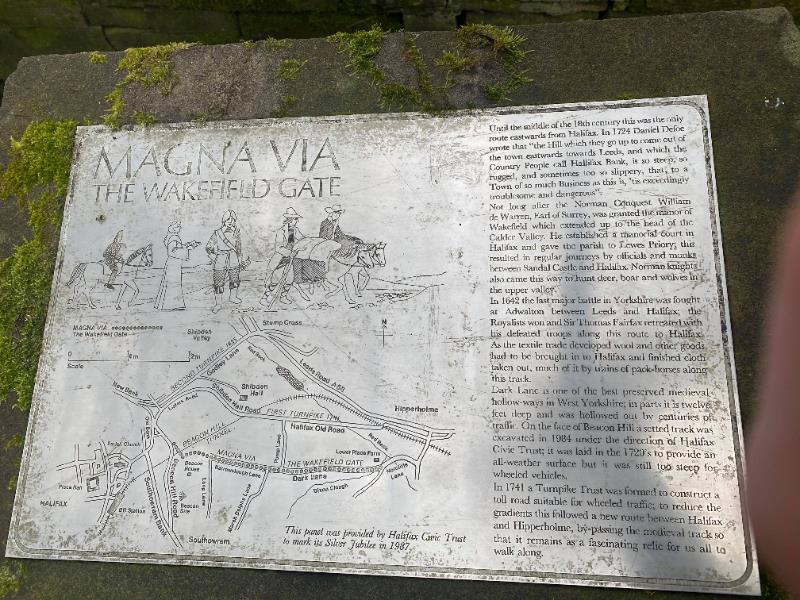 There where some lovely towpath running along the canals but the part that I didn’t like was the bridges over the M62 – I suffer from vertigo and when I am high I feel the urge to go to the edge as though its
pulling me so I try not to go anywhere near heights, but there was no option – so it was head down and run – look at the pavement and just keep going

So how did we do

Our 3 hour aim time ended up being 5 hours 18 mins 10 seconds – but because we was the first team to attempt it, we got the FKT

If you fancy doing an FKT check out their website here

I want to say a big thanks to my kit providers

Salomon for the Race vest

Also to Nike for creating an amazing shoe in the wildhorse,

Voom and Mountain fuel for an amazing nutrition products

and my new found favourite sock from Compresssports