What a season we have had in this year’s UK and Ireland Spartan Series. Both the Men’s and Women’s series have produced some excellent racing and deserved winners.

Spartan Midlands Super seems so far away, but that's where it all started.

Tom, Luke and Scott took the podium slots in the Men's Division, whilst Andrea, Nicki and Ellen made up the Women’s podium.

We then went up to the hills of Scotland for the much shorter Spartan Sprint race.

Once again Tom took top spot in the Men’s race, but Fergal pipped Luke to the second spot and Luke had to make do with a third place.

In the Women's race the top two from the first race reversed positions, with Nicki finishing ahead of Andrea. Becky Neal took the final podium spot in third place.

The third series race was at Pippingford Park, a historic venue in OCR in the UK and the home of 2022 Spartan Euro Championships. But that’s for next year, this year it was home to the first of two Beast races in the series.

However, the recent announcement of the 2022 Spartan Euro Championships tempted a few racers from the continent cross the channel to try out the course. This included Italian Spartan Pro Team member Manuel Moricona. Manuel had a neck and neck battle with Tom Tweddell that came down to the final few obstacles, Manuel pipped Tom this time with the spear proving to be the main difference maker. Luke once again took the third-place podium spot.

In the women's race we saw just as much action, Whilst Nicki again took the win, her main rival Andrea suffered with the cold and could only manage third.  Kate Stillwell played spoiler and took second place in what would be her only Spartan series event of the year.

The final race of the season saw athletes head to Wales on a wet and blustery weekend to take on what turned out to be a real Beast of a race.

The race was a mixed bag with failed obstacles and wrong turns but once again Tom Tweddell took top spot to make it 3 out of 4 wins.  Jason Brunnock saw a return to form to take second and Jack Carpenter with his first podium of the year in third. Unfortunately, Luke took a wrong turn on course which saw him tumble down the placings on the day. However, he still finished to earn some points which would prove crucial in the overall series.

In the Women's Race we saw Nicki Take her third win of the series but an injured Andrea could only manage fourth.  As predicted on the UKOCR podcast the hills played to the strength of Federica de Caria who took second place earning her first podium of the year. Her teammate Becky rounded out the podium in third place again earning important points in the series.

We believe that this leaves the final standings in the Spartan series as below: - 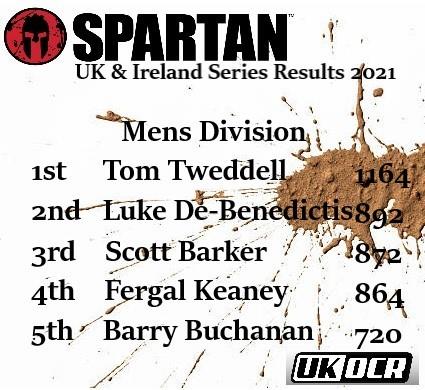 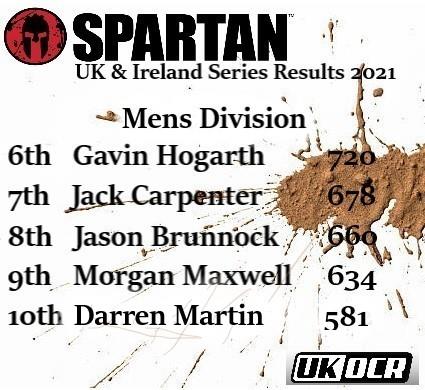 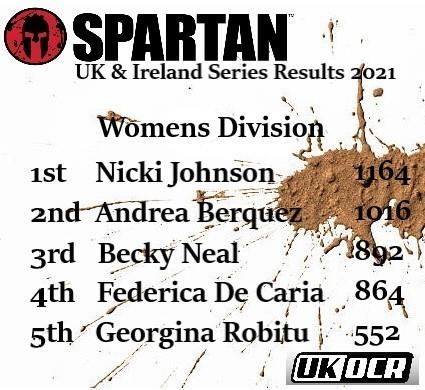 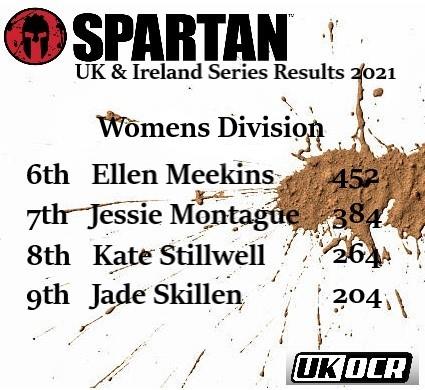 Disclaimer: The above standings have been created by UKOCR and are based on the race results as per Athlinks at the time of writing. To compile them we have used the following assumptions from precedent and the information published by Spartan:

1- Doing a single race qualifies you for the series, although obviously the more races you do the more points you can earn. This is important because in the Men’s series Jason Brunnock missed a race yet earned enough points for a top ten. In the Women’s series only nine ladies finished a series race so the lower half of the table consists of athletes who only completed one or two races.

2- That the UK and Ireland are using the standard "300 point Scoring System" that Spartan uses for other Elite series around the World.
Given our standings match up with what were announced at Wales we believe this to be the case.

So, whilst we are confident that the above results are correct, they are based on the information available at the time we published this. So, they may be subject to change in the event that Spartan subsequently assesses penalties etc or if the assumptions used are incorrect.

Well done to everyone who took part in the 2021 Spartan Race Series. Here’s to another great year of racing in 2022.

Check out our podcast Here to listen to interviews from some of the Elite runners Including Tom Tweddell, Luke De-Benedictis, Scott Barker, Becky Neal, Federica De Caria and more,

Also check out the Who's hot Podcast as we discuss the Races, the tactics and who we think will be hot.