HYROX the World Series of Fitness Racing presents its European Championships this weekend on Saturday 21st January, hosted at the MECC Maastricht.

The European Championships are the first Elite Race of the year and forms, along with the North American Championships (Chicago 11th Feb) and the World Championships (Manchester UK, 26th May) one of 3 opportunities for professional racing in the current HYROX season format.

Qualification for the elite race in these races is earned via athletes’ performances in regular season races in the Pro category, invites are handed out based on current rankings in the Elite 15 with invites not accepted being passed onto the following ranking individual until 15 slots are filled. 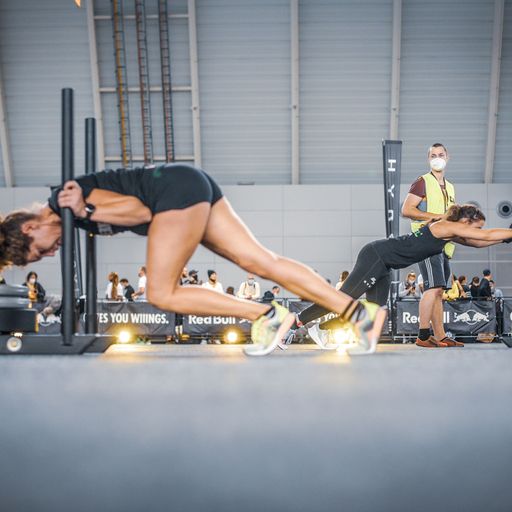 In the Male division Tiago Lousa comes in ranked 1st with his 57:54 time in Frankfurt the fastest time clocked this season, he will face stiff competition from a field stacked with male athletes that have proven themselves at the top end of the sport. Former world champion Tobias Lautwein makes his return to elite racing having missed last year’s World Championship race due to illness.

Veteran athletes, Alexander Roncevic, Joffrey Voisin, Tim Wenisch, Michael Sandbach, Tom Hogan and Martin Michelius all qualified for last year’s world championship race. They will be looking to upset the order at the top of the sport.

Qualifying times across the men’s field have been fast this year, qualification for the Elite 15 final standings and World Championships qualification have already broken the 1-hour mark with the slowest qualifying time currently standing at 59:59 by German athlete Dieter Schwarzkopf. Whilst overall times have been impressive this season no athlete has come close to current World Champion Hunter Mcintyre’s 55:09 time set in Dallas last season, with World Championship qualifying spots up for grabs expectations will be high to challenge for this record time.

In the Women’s division Swedish athlete Mikaela Norman has set the bar with a blistering 1:00:45 in Hamburg which is also the current World Record in her first HYROX race. Norman is a crossover athlete whose background lies in CrossFit where she is renowned for her endurance capacity, expectations are high for a follow-up performance.

In the 2nd qualifying spot sits US athletes Megan Jacoby, another exciting prospect who broke the world record, previously held by 3rd qualifier Linda Meier, earlier in the season before Norman’s remarkable run. One of only 3 athletes to qualify in an American race, Jacoby is tipped to be a challenger for the World Championships this year, this race will be the first opportunity to see her and the other American athletes including former World Champion Lauren Weeks and veterans Terra Jackson and Alandra Greenlee compete against their European counterparts.

In the US contingent, Lauren Weeks makes her return to elite racing following pregnancy last year during which she competed in the Las Vegas World Championships. Weeks had been the stand-out female athlete in the previous season’s competition and a return to full fitness will make her a tough competitor to beat on her day.